We went to the Musée de la Musique, in La Villette, which contains over 7000 musical instruments within it’s walls. The museum is located in the Cité de Musique, a group of performance spaces, rehearsal spaces, studios, and this— a museum dedicated solely to music.

The Cité was designed by Christian de Portzamparc in 1995, because of the need for a home for the Paris Philharmonic.

After the museum, we went to multiple Woodbrass music stores, which are near the Museum in order to serve the many musicians (both professional and student) that gather in that area, as well as serving the Paris Philharmonic. I bought a pair of Vic Firth 5A’s with nylon tips, earplugs, and a stick bag at the Batterie store (the French call percussion “batterie”). 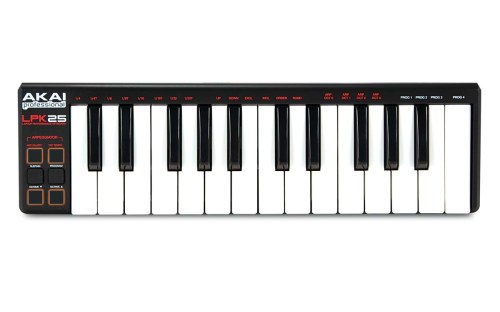 I bought this specific controller because I know one of my favorite musicians uses it, Stromae, Who I heard about from my amazing French teacher Mr. Fritz. My favorite track currently is either “Alors on Danse” or “Papaoutai.”

That night, my mom and I went to the Duc des Lombards bar/jazz club in the Marais. The Marais was once the “aristocratic district.” It is cool and beautiful, and extends across parts of the 3rd and 4th arrondissements in the heart of Paris. After the revolution in 1789-1799, the aristocrats moved out, and poor bohemian artists moved in. The Marais is the most famous Jewish quarter in Paris / much of Europe (according to A Paris Guide). The Duc des Lombards bar/jazz club has been in the Marais since 1984. My mom (who is an incredible professor) takes her students there to learn about jazz  and the relevance of jazz clubs to writing (and the writer’s experience) in Paris.

I was THIS CLOSE to the stage! 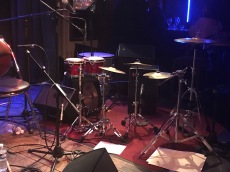 This was the drummer’s set up… 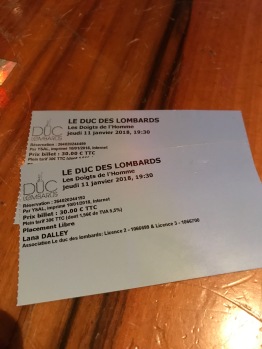 Tickets to the show!

At the show, they played:

The drummer had this setup where he was surrounded by cymbals, and sat on top of a cajón, a Peruvian percussive box. “Cajones are primarily played in Afro-Peruvian music, as well as contemporary styles of flamenco and jazz among other genres.” (from that Wikipedia link) I had never seen this setup before, and it was super interesting to watch the drummer play it. Please note– no sticks! Everything was hand percussion! The guitarist was also crazy, as during solos, he would play these sixteenth to thirty-second note rhythms that sounded amazing.

Here’s a video of them playing “I See The Light” (but not from the concert I saw): link.

My favorite thing about music in France is that it’s so unique— it comes from so many places, and uses so many ideas. Stromae was influenced by: Belgian New Beat music (and electronic music generally), French pop, and Congolese music.

And that’s just one artist, pulling together diverse ideas!

La Doigts de l’Homme say they are influenced most by Django Reinhardt, but that they pull influences from: traditional African instruments (specifically from Burkina Faso), the Afro Jazz (listen at Last.fm: Link) or Celtic hybrid groups of the 90’s, Olivier Kikteff, and “traditional” Spanish gypsy music and Flamenco.

With all of these ideas coming together in one place, it’s no surprise that the music can sound so unique!

Filed under From Eli, In Paris, With Pictures!