I am doing my blog in Paris! 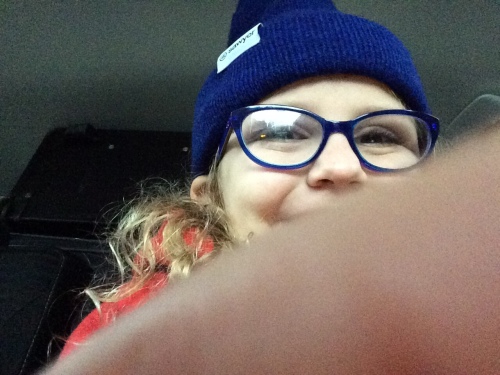 (this has my finger in it, but my dad says it is super cute, and it shows my Sawyer hat I got for Christmas!)

(Editor’s Note: Lana was pointing out that this entry seems a bit LONG for a seven-year-old. I will say that Sawyer wrote 70% of the words herself, and dictated the rest to me– I flatter myself that you can tell which based on some of the non-traditional spelling– and I will say that the writing of this took about three hours in total, distributed over a day.)

I used to be in a place near a Castle in France, but now I’m in Paris. We went to another place, it was called Orleans, and it had very slippery stairs which were a spiral, so instead of my little brother sleeping UP stairs he slept DOWN stairs because my parents thought he would fall! So he slept down stairs with my mom and dad, and sense dash is rilly big and it was a small bed I guess they were very squished! At least I think they were…

So enough about them let’s talk about you guys!!! I am wondering how you are doing?

I Skyped my class on Friday. They had some fun and some questions about Paris. Jake asked me what was my favorite food, and I said I don’t know but then I thought “crepes!” I told them that I like mine with butter and sugar even though when the butter gets melty it can EXPLODE all over your jacket, for instance.

I also said that I had been eating baguettes. Ms. Anderson asked me if I liked butter on my baguette, and I said yes but that I also like Nutella. Other kids also like it in my class. And family. Both kids and adults in my family.

We went to the boulangerie across the street, because my grumpy old dad asked them if we could see how bread was made here. He’s not actually grumpy all the time, but it is funny to say! But sometimes he is grumpy.

The Boulangerie is called Au Bec Sucré, and it is SO CLOSE BY. Finley and I bought bread there BY OURSELFS the other day! But, anyway, first we went in the back door to the room where they make the baguettes. It was FULL of special equipment. The rooms seemed small because of all the stuff! That day had been a delivery day from their supply guy. He had brought the flour and the water. THEY BRING IN WATER? Also, the truck that comes has a spot for the bags of flour, it’s called “D” in the picture below, but most of the flour gets PUMPED into the building through a hose! You can see how much of the truck is flour, it’s everything that’s not “D,” or the driver! 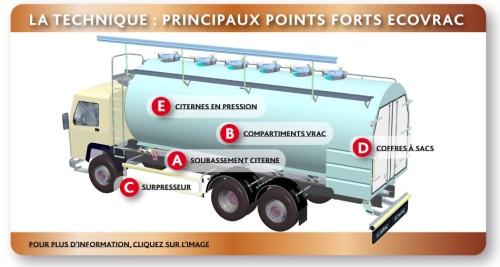 They brought 5000 pounds of all the different flours. The machines mixed the dough, and then kneaded the dough. There were two speeds, for different times. It was made of the water, and flour, and what they called “savor,” but I think my mom calls yeast, and a TINY BIT of salt. After the kneading machine, the dough goes into the scary machine that cutted it! Each big ball of dough got cutted into 16 squarish pieces. It looked like this, but it was all flour covered: 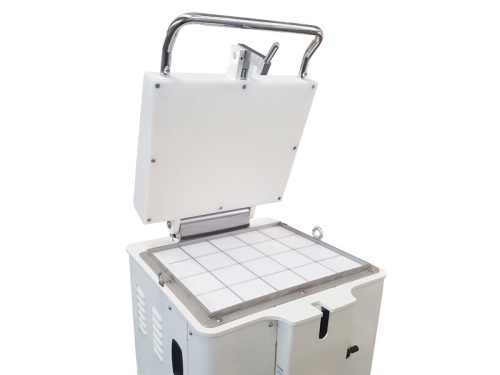 Then the squarish pieces went into the NEXT machine, which rolled it out a little, and put it into trays, which were longer than the rolled parts. And the little rolls were about a foot long or 8 inches 😃😀 then the worker took the medium pieces and put them in a different tray witch was different and longer than the first tray and only had room for six or eight bread doughs. The new trays went into a stacker, which held ten trays, so there were between 60 and 80 breads in the stacker. The stacker went into a new machine, where the breads had to rest. My dad said that “they weren’t sleeping,” and I thought Dad, I am seven, I know. Dad jokes are stupid. Did you know Dash likes to say things are stupid, all the time? My dad did say that in America another word for “rest” is called “proofing,” which means when the yeast starts to rise in the bread. This is important to know, next.

Because the worker took the breads AFTER they had rested, rolled them a little more, so they were about two feet long, and THEN HE CUT THE TOPS OPEN only a little bit! Because if you don’t slice the top, what do think happens? THEY EXPLODE IN THE OVEN. OH MAN! Then, no more boulangerie! The baker said it wouldn’t explode the bakery, though! Only the breads. But it would be funny.

Also, we forgot to take pictures because it was cool, and we moved pretty quick! So my Dad helped download some pictures, when I didnt have anything goo.

SO, after the resting and the rolling and the cutting, the baguettes FINALLY went into the oven. Each rack on the oven could hold 8 breads I think. And the oven sickled (ED: “cycled”) the racks down from the top by itself, so the worker was just loading one side at the top, and unloading the other side at the bottom. I had to move quick to not get hit by the loading thingy! So, you wan to know what’s crazy? This one worker was making the bread for this one shop, and he was making 1000 baguettes a day, for every day! We couldn’t believe it!

Also, when the baker showed us the rested bread, he tapped me on the nose and Finley on the nose with the dough, because he was funny, it was like the clown we saw with the balloons, but then Dash was leaning forward and leaning forward, so he could get tapped on the nose too, but INSTEAD the baker turned the dough into a necktie around Dashie’s head! He threw that one away, though. He wouldn’t bake that one. NO.

After we saw how baguettes were made, we went down the TINIEST staircase! This wasn’t just a boulangire, but ALSO a patisserie, which is a place they make cakes (that’s called gateaux, I asked my Dad) and sandwiches and candy and stuff. We saw them making croissants, which was cool, and worked almost the same to the baguette stuff, but with different machines, and they used egg to make the croissants shiny. The baker also gave us meringues that he had made the night before, which were getting ready to be sold later. A lot of stuff gets made early, even early in the morning, at a bakery.

They had a special refrigerator thingy that helped them make the food safe by freezing it super fast. The baker said there were rules about that. All of the work was cool, but when my family herd them say they make 1000 baguettes a day they freaked out and my dad and older brother and sister and I thought 💭 It WAS AMAZING!!! I don’t know what Dashey thought.

One response to “Sawyers blog!!!”