[Edited to add pix!] These first three days in Barcelona have been great! Kids have been enjoying a bit of the ol’ Griswold method of seeing the sights!

(I say this, knowing full well that this is the actually the BEGINNING of our fifth day here. I start to write these posts, and then, well… we end up DOING things!)

We went to see Sagrada Familia on Christmas Day, which was incredible. 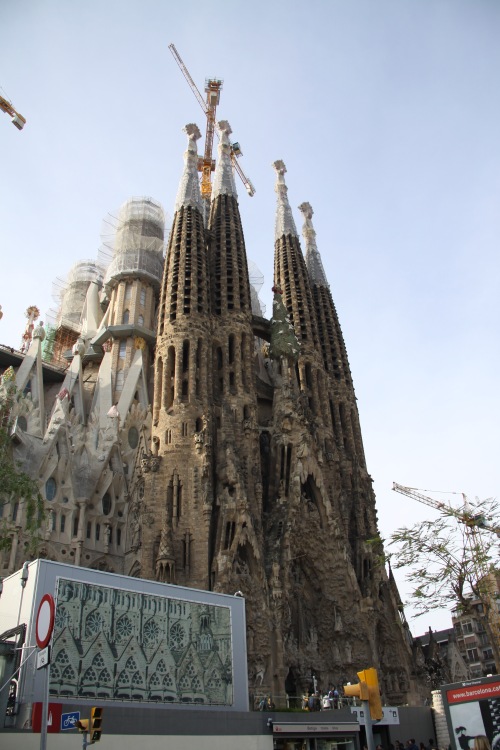 We had come with established ideas about Gaudí’s design, and the church itself– notions about creativity, whimsy, and (perhaps) a sense of alien-ness, of unreality. We were not prepared for the scale, or the beauty, or the human nature of the interior spaces, especially. It is an incredible, mind-blowing thing to behold, for sure– and inside, it is warm, and beautiful. Without exaggeration, I think it is probably the most moving cathedral I have ever been in. Lana said as much herself. Pictures suck SO HARD compared to the feeling of the interior… 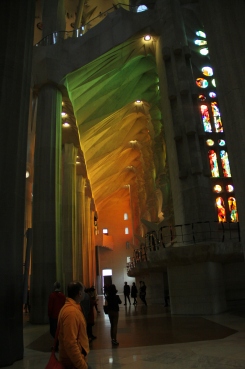 The actual ENTRY into Sagrada Familia was a bit exciting for me, personally; I had packed my bag for the day, based on my experiences with security at important cultural activities / institutions in France… I found out that the standards in Spain (for reasons that will be explained later) are different. My bag went through the scanner, and I got handwanded (as I always do), and looked up to discover several security employees excitedly pointing at the monitor. Oddly, the thing in my bag that was most in question was my stationery kit– something that had never come up in France! They had me pull the kit from my bag & then examined it closely– I thought I was going to lose all of my favorite pens and pencils– until they told me that my MARKERS were the problem, and that I could “check” the kit (they gave me a ticket) and pick it up after our visit! 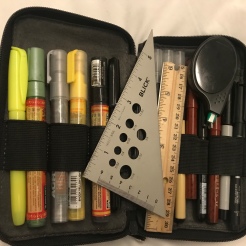 They also grabbed my Gerber “Shard,” which I had specifically picked as an EDC while abroad, as it had no blades (as my usual compliment of pocketknives do)– it, too, was determined verboten. Anyway, claim check (and belt, and shoes) in hand, I toddled off.

We walked around inside for a bit, which I cannot recommend enough. The quality of light is amazing; the huge sweeps of rainbow colored light in the nave were unlike anything I had seen before. (See crappy pictures above 🙄) The columns are crazy, and have carbuncley light fixtures near the ceiling that makes it look like someone has wrapped polished quartz pebbles to the tops of peeled twigs with silver wire… 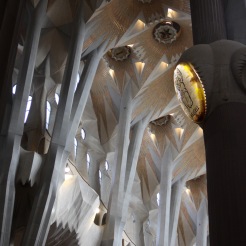 Soon, though, we had tickets to go up inside the Passion Tower (there are tours of both the towers of the Passion and the Nativity façades– we chose Passion because it was 75 meters / 246 feet tall, and taller than the other at “only” 45 meters / 147 feet). Unfortunately, Dash was judged too “péquino” to go up with us, so we had to take turns waiting with him.

We’re in Barcelona with family friends, so Dave and I waited below with Dash while the rest went up– and hanging out is never a hardship. The group’s return (signaling our imminent departure for the tower) was startling, though, as they were all out of breath, and Lana was interjecting words about “beautiful” and “surreal;” Dave and I embraced the accidental luck of getting to go up by ourselves (we travel with four kids; the Duckworths travel with three), and we went up looking for whatever had impressed everyone else so much.

The elevator drops you off next to a narrow path that leads out to a bridge between towers– I’ll update this entry with some images after I download my camera, as (contrary to much of the world), I’m still traveling with an actual CAMERA. The views are incredible, both of the façade, and of Barcelona itself. 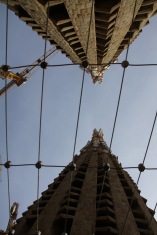 After the bridge, we started our descent; here was proof of something I had heard about Gaudí, but not heretofore seen. Each pair of steps (and, mind you, we’re on a staircase built into the side of a tower, descending on a helix around a hollow center), so, each set of steps has a header supporting the steps above. Each header is split laterally into three parts, with the center section hollowed out in the center, with its ends coped into the other sections. (Lana totally just tapped her watch and said, “tick tock…”) All this to say, each of the HUNDREDS of steps inside the tower was decorated; each set of steps showed the presence of a human hand– probably several hands.

And this was what I had heard about Gaudí– that is WASN’T “don’t sweat the details,” it was “SWEAT ALL THE DETAILS– IN FACT, INVENT DETAILS TO SWEAT.” Totally worth it; what an incredible staircase!

After the first 150 foot of staircase, we left the larger tower, and transitioned to a smaller internal circular stair. And this is what had Lana gasping, and was undoubtedly the reason Dash and kids of his age had been UN-invited to the tower party. This stair was again a helix, not a spiral (IE, there was no center post, the steps were attached to & followed the outer wall).

But, unlike the previous stair, this case had no inner wall.

The handrail was on the outside.

The diameter was only about 3 feet bigger than twice the step width, sooooo… there was an EXACTLY human-width hole, with no guard or handrail, going from top to bottom of the ~100 foot shaft. Exactly the sort of thing to make Lana huff and puff a bit! 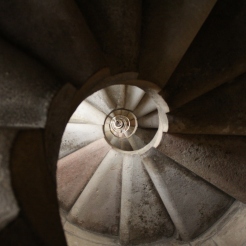 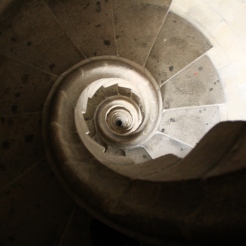 The bottom of the shaft brought us full circle (see what I did there?) to the appropriation of my stationery kit. The wall of the last 15 to twenty feet of staircase wall was liberally marked in ink– mostly names– but some incoherent tags as well. Which made me understand the security people’s reluctance to give a dude with a s–t ton of markers free unsupervised reign inside the building.

Which, again, gave me pause. I really didn’t like the scribbled wall there. I love graffiti, though, and I think it’s one of the most human activities– a way to extend our lifetimes by leaving our mark on something seemingly permanent, like stone. Here, though, in the context of Gaudí’s details, the marks seemed cheap, bringing down some of the effect he was going for.

One of the things I appreciate about Barcelona, having noticed it for several days now, is the respect muraliste seem to show on the streets. Almost every storefront has a shutter of some sort. Most are muralized with the intent of the owner, indicating what kind of store is on the other side. Even on those that seem to just be a canvas for a passing artist, though, the artist respects the edges of that canvas– no-one seems to hit the stone of the building, leaving the structure, which might be hundreds of years old, free of paint, ink, and wheatpaste. No one seems to hit the exterior walls of churches, either. Electrical panels, service hatches, the backs of road signs, these are fair game– but, as I say, there seems to be an understanding and respect for the age of structures not shown elsewhere.

And here, at the detail-rich bottom of the staircase, in the tower of a church (regardless of the fact that I do not share the faith), on Christmas Day, I wish that some of these fools with American sounding names felt some of that same respect.