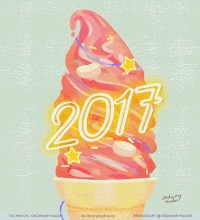 I am glad that it is 2017; a new year is a time to start over and forget about horrible stuff like, for example, not getting a hundred on my math facts, or, Donald Trump becoming president, stuff like that like that. And its a time that you can tell yourself “I can do this.” A new year is a new chance to start over. And that is why it is so important.

Now, this next part might bore you to death and if it does, just remember, it’s my dad’s fault– he’s making me work on writing these posts. 😫

One of the first things we did in 2017 was, well, I’ll tell you. It’s straight from my journal. January 3rd was my favorite kind of day, a Dad day. (Well, I also like Mom days, IE Fridays / Saturdays / Sundays, when she isn’t teaching– and if I only get to choose one, then THOSE are my favorite), but anyway, it was a Dad day.  We went to three stores. First, the vegetable store. Ours is called “Verger Daumesnil” which means the Daumesnil Orchard. Evidently, Pierre Yrieix Daumesnil was “a French soldier in the armies of Napoleon,” according to Wikipedia. (My dad ALSO made me add that.) Then, we went to the boulangerie / patisserie (that’s a “bread” and “sweets” store) which is called Au Bec Sucré. Finally, Franprix, our little shopping thingy right downstairs.  We got two baguettes. I said “Twa Bagette sil vous plait,” and they gave me two!  We went to the other stores to get lots of other things that are good inside of sandwiches, like salami.  At the Verger, we also got cherries. From Franprix, we got crisps (those are potato chips, in English) and… wait for it… wait for it……   Finley Soda!!

We went home to make the sandwiches. Sawyer and I cleared, wiped and set the table, while Dad actually made the sandwiches. (Of course, Eli was playing on his phone. ) The sandwiches, when we finally ate them, didn’t taste very good. JUST KIDDING! It was my favorite sandwich ever! They had tomatoes, salami, butter with sea salt crystals (trust me, it’s good), fromage (that means cheese), and lettuce. I think the vegetables are better in France. We’ve had the same sandwich several times since then, and it’s still great!

After that, we went to the park near our house. It’s called the the Bois de Vincennes. And guess what? The play equipment is only two weeks old! That means they made it right before we came!

Here’s Dash on one of the new swings!

It must be good luck or something! We played on the equipment for a while, then we got on the zip line. Yes, there is a ZIP LINE! Then, after a while, we got bored and my dad met this cool guy who was the Gardener for that section of the park. He gave us toys– when he eats lunch, he eats at Burger King (I know, right?), and they always give him toys, and he doesn’t know what to do with them, so he gave them to us! Then he told us there was a circus in the park, and that there were lions. Of course we went, and saw the lions in the cages behind the big top, but we didn’t have tickets to the circus, so we had to look through a gate. But we DID see them! They were in a large cage, a male and a female. The male was large, and had broad shoulders– he looked like a king. And, the female, WOW! She was just as big as the male, and the way her head was tilted, it made her look like she was watching our every move. 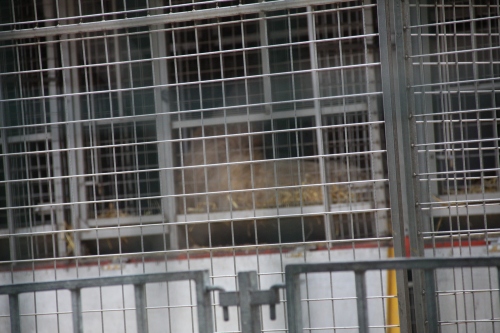 It’s hard to see, but she’s in there!

We left the lions, and went to see the Buddha in the park. We walked all the way over, just to find out that it was closed! But we saw this big lake, full of swans. One looked like a queen, more silvery than the rest! Then we went to a really cool restaurant, called Le Picotin; I ordered the chicken burger, BUT it was totally falley-apartey. I didn’t like it that much, but the salad and frites (that’s fries, to you), was good! 😄 My folks thought it was one of the best restaurants they’ve been to in Paris. It was a great day!

Filed under In Paris, Restaurant Mentioned, With Pictures!

2 responses to “The New Year ”