Yes, Paris Is Incredible. The Kids Have Confirmed It. . . Part Three.

The third part of the EPIC Paris travelogue commences here. I can’t seem to make them shorter, and I apologize. Maybe I can highlight essential areas, so that people can skim?

Day Three was Monday. As before, we ate breakfast at the hotel. We left pretty early, as we thought that Monday was probably the best chance for clear skies (it was), and we were heading for the top of the Eiffel Tower. We took the Métro to the Trocadéro stop, and walked DOWN the hill, this time, toward the Tower.

Sidenote:  Eli made a few wry comments about the gilded statues that line the terrace of the Rights of Man as we walked by; he wanted to know why some of them, like so many of the statues we were seeing in Paris, were naked. I told him that for many sculptors, the perfection of the human form is a representation of truth, and that adding clothes and decoration was obscuring or hiding the truth. He said, “Hunh. They make me uncomfortable.” I was a little surprised, an asked him if ALL nude statues made him uncomfortable, or just these, and he said, “Eh… mostly these.” I am still not sure what it was about the nudes among these eight that got to him… maybe being naked AND gold? The strange (to my eye) 1930’s naturalism of some of them? He later told me, as we walked by a rather hideous piece of public art, “You know, I like your sculptures better than this.” Which made me feel very good– and then immediately wonder what his response would be if I sculpted a nude. 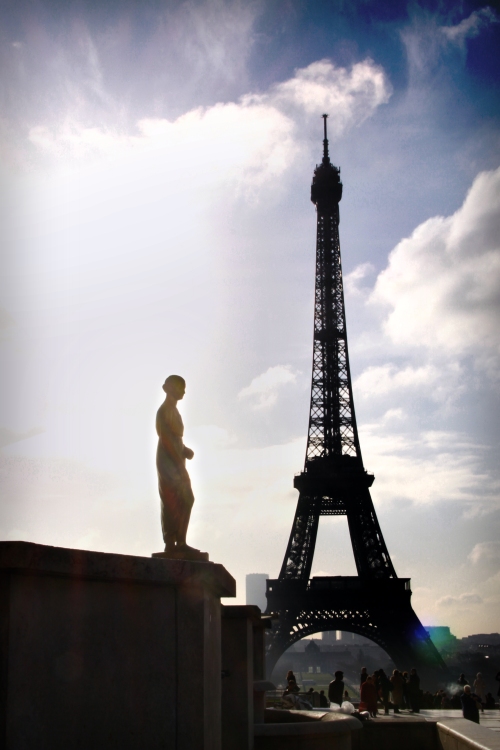 One Of The Gilded Statues. This One Sheepishly Wearing Her Robe.

The children had been impressed with the beauty of the Eiffel Tower at night, but were totally blown away by the scale of it as we approached in the daylight. The ride to the top was made difficult only by a) the need to switch elevators, as the path between the lifts was obscured by construction b) the incredible COLD as you moved up into the unobstructed wind and c) having to fold and carry the bloody stroller. I love the convenience of pushing our BOB, but hate the fact that it folds to a size and shape only slightly more manageable than when extended– and that when folded, you can’t STAND IT UP or LEAN IT on anything. NOT handy. We made it to the top, regardless. The kids were fascinated, and struck with how big the Arc de Triomphe is, even at so great a distance. We descended, and walked down to the Seine to take the BatoBus.

We will have to try taking the BatoBus again in the summertime. We can only assume that it’s schedule becomes a trifle more frequent then– as it was, we waited for a good while before boarding, and then realized it was going to take 70+ minutes to get from the Eiffel Tower to The Louvre, our planned destination. We compromised by getting off the boat early, at Saint-Germain-des-Pres, and walking across the Seine via the Pont des Arts, an activity which we had wanted to do anyway. We were shocked at the number of padlocks on the bridge. Evidently, the idea is that a couple would engrave or write their names or initials on a padlock, attach it to the meshing of the side panels of the bridge, and throw the key into the river below. A very romantic idea. We were discussing the elaborate engraving on one, when Eli asked us “why would you want to be buried with a lock?” We were as confused as he was. When we asked him to explain, he said that he has heard us talking about “padlocks being in graves.” This, at least, can be written off to his having  mis-heard us– as opposed to his comment, “You know how they say France is the land on stinky cheese? Why do you think they call it stinky cheese?”

As mentioned before, Eli is a sweet boy, with a pleasant disposition. 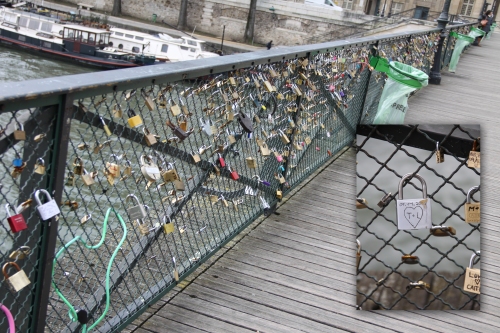 Look At Those Locks! And Somehow One With Our Names On It...

We had decided to go in to Angelina’s before visiting The Louvre— we had been told that “The hot chocolate at Angelina’s is legendary (and somewhat touristy), but an experience…” SO, the plan was simple; snack, then art. However. Given that a) the baby hadn’t eaten since before the Eiffel Tower b)The BatoBus had dropped us off east of The Louvre, and on the wrong side of the river c) Angelina’s is halfway down the Tuileries garden, to the WEST of The Louvre and d) the older kids weren’t very keen walking quickly in the cold, we soon hit a kind of crisis– an episode akin to that described previously in the Bataan Death March post. This involved Lana half-jogging through the streets between us and Angelina’s pushing a screaming baby, whilst I galumphed behind her with Finley on my shoulders (alternately complaining about being tired, thirsty, hungry, and cold), and poor Eli scampered along as best he could in the rear. We came to a screeching halt in front of Angelina’s (which was totally beautiful, by the way), snatched the squalling baby from the stroller, and quickly quieted her (in an attempt to gull the staff into thinking we were a quiet and sedate family, who wouldn’t cause the establishment any trouble). We needn’t have worried. When we walked in, the host sized us up, and graciously offered us a secluded spot on the upper floor, in a beautiful salon with a great view of the street. They were astonishingly cool. The server came, played with the kids, took our order, and smiled and laughed the whole time. As I have said before (and maybe traveling with kids is the key), we NEVER saw an example of a rude French waiter/server/etc. SO… we ordered the hot chocolate. And a cheese plate, some macarons, and two other desserts which all turned out to be stellar– but the real story is the chocolate. It comes in small pitchers, and seems to literally be hot, melted, incredible chocolate. Nothing else in the pitcher, I’m pretty sure. You get a rammikin of whipped cream to dilute the chocolate to the milky-ness that you specify– it is insane. I quote the adult child of a travel writer who first visited Angelina’s when he was eight: “It is the epitome of a chocoholic’s euphoria, and is a taste that would even have Willy Wonka asking for seconds.” 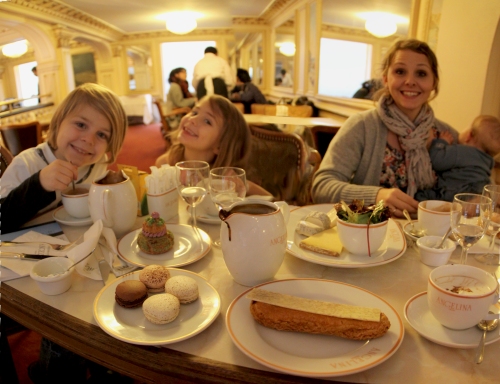 I Know It Looks Like All The Food Is Sitting In Front Of Me, But...

We followed this epicurean feast (a dinner of desserts?) with a slow roll through The Louvre. Eli and Finley saw the Mona Lisa first hand– Lana had been very keen on them seeing what all the mystery and interest was about, and I think they were affected… the sheer size of the crowd there to look at it certainly affected me! Eli wanted to see sculpture, so we wandered through several floors of old and new-ish statuary; there was an exhibition of Tony Cragg’s stuff, which Eli got pretty interested in. After museum-whiteout set in (which did not take over long, given our chocolate consumption), we headed out of The Louvre and on to Le Fumoir, following a friend’s advice– “a lovely cafe/bar called Le Fumoir right in the 1st arrondisement, which is useful to know about. A bit swanky, but I’m sure kids would be fine, and it’s close to the Louvre and so on.” It was beautiful, and a bit swanky, and the kids WERE fine– even after Finley shattered a wineglass at the table. On accident. She wasn’t demanding more wine (that will undoubtedly happen on the return visit, regardless of her age at that point), and they were very gracious, and seemed to be content with us holding down the table ’til closing, but we still decided to make our exit.

We hit the BatoBus again. (Had to make the investment in the “hop on, hop off” tickets worthwhile!) We went a single stop– from The Louvre to the Champs-Élysées— and “hopped off” in order to make our way up the street to Guerlain, a parfumerie that was supposed to represent what storefronts on the Champs-Élysées were like ‘back in the day.’ We were not disappointed. We were taken upstairs (oooh, the exclusivity!) by the concierge in a hidden lift, and Lana walked through the “scenting floor” whilst the kids and I sat in a little secondary salon & colored. (We were informed that it “would not be healthy” for the children to walk around on the scenting floor– that the concentration of smells “could do some damage to them.” This made me think of a Saturday-morning-cartoon bad guy using his Devices Of Evil Smells to hold a city hostage… but we took their advice gladly, anyway.) The store was very cosmopolitan, at least to my eyes, with pretty expanses of small gilded tiles and beautiful art-nouveau ironwork downstairs, and Lana walked away with an absolutely incredible scent, one that is (supposedly) exclusive to Paris. Going to a parfumerie like this was something that we had often discussed when talking about visiting Paris, and it was très cool to finally have the vision realized.

We returned to the hotel (smelling awesome), and decided to have dinner in the room. Take-away does not seem to be as common in Paris (or, at least, we didn’t know the methods that people used to describe it and/or order it!) We found a place called Thai Siam that was nearby, and perused the menu online– using the babelfish translator made for some exciting menu items, such as:

Khao Phat– 5,35 €
Rice jumped to the shrimps or tiny chicken or smallest ox (with the choice).

Phao Seyou Will Trai– 7,50 €
Noodles jumped to the inhabitant of Thailand, with all the shrimps, the squids, some chicken and tray of broccolis.

Kob Phat Bia Kaphrao– 12,10 €
Thighs of frogs and can jumped to the basil.
(thighs of frogs, basil, sweet peppers, carton of condiments).

Tom Yam Kung (Read Kai)– 6,90 €
Prickly shrimp soup (or shortest chicken) to your early inhabitant of Thailand.
(the shrimps or the chicken, bring youngest mushrooms, young but tearful ears of corn, and the cutting of lemongrass).

We attempted to call and order– no go, sadly,  even as I tried my hardest to ask for all the “inhabitants of Thailand,” “smallest oxen,” and “thighs of frogs jumped to the basil” that I could get. I walked to the restaurant, whilst Lana bravely forged ahead with plans to bathe all three children. The meal was ordered with little difficulty in the restaurant (I could point to the menu), came quickly, and returned to the room hot. It was a fine dinner. We had so many incredible meals, one had to be the nadir, and this was it. All the shortest chicken in the world (with the choice) couldn’t compete with our other meals. What can you do? We went to bed.

And I’ll tell you what I can do– stop boring you with this entry. We’ve made it over the hump with this one– only two days of maundering prose left. And then we’ll post some more of Eli’s papers.

Filed under In England, In Paris

4 responses to “Yes, Paris Is Incredible. The Kids Have Confirmed It. . . Part Three.”